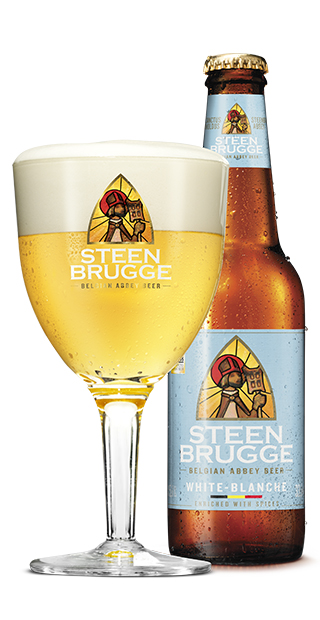 STEENBRUGGE Wit-Blanche abbey beer is a wheat beer brewed with 40% unmalted wheat and 60% malt. It has a refreshing flavour and a fruity, lightly smoked yeast aroma combined with the subtle Bruges “gruut” blend of herbs and spices, with an emphasis on coriander and Curaçao. Top-fermentation beer with secondary fermentation in the bottle.

STEENBRUGGE Wit-Blanche is fermented with its own STEENBRUGGE top-fermenting yeast strain, which provides a smoked, phenolic aroma, together with a discernible fruitiness.

STEENBRUGGE Wit-Blanche undergoes a second fermentation in the bottle. During filling, some sugar and yeast are added which ferment into alcohol and carbon dioxide gas in the “hot chamber”. This gives bottled beers a slightly higher alcohol content than the same beer from the keg. The yeast sediment at the bottom of the bottle protects the beer against oxidation, thus preventing rapid ageing of the taste.

Moment:
Affordable specialist beer – Made refreshment and quenching thirst – To be drunk with kindred spirits
To be drunk alone or with friends