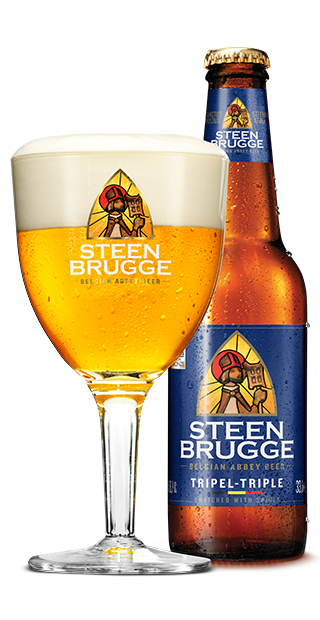 STEENBRUGGE Tripel abbey beer is a golden-blond beer with a rounded malt character, a scented touch of hops, a warm, full flavour and a fruity, lightly smoked yeast aroma combined with the subtle Bruges “gruut” blend of herbs and spices. Top-fermentation beer with secondary fermentation in the bottle.

STEENBRUGGE Tripel is fermented with its own STEENBRUGGE top-fermenting yeast strain, which provides a smoked, phenolic aroma, together with a pronounced fruitiness.

STEENBRUGGE Tripel undergoes a second fermentation in the bottle. During filling, some sugar and yeast are added which ferment into alcohol and carbon dioxide gas in the “hot chamber”. This gives bottled beers a slightly higher alcohol content than the same beer from the keg, as well as a higher carbon dioxide content, which gives the beer added zest. The yeast sediment at the bottom of the bottle protects the beer against oxidation, thus preventing rapid ageing of the taste. The presence of the yeast causes the flavours to develop over time. This makes STEENBRUGGE Tripel a true stock beer.

Moment:
Connoisseurs’ beer – For drinking to relax or as a personal treat – Especially alone, but also in a small group